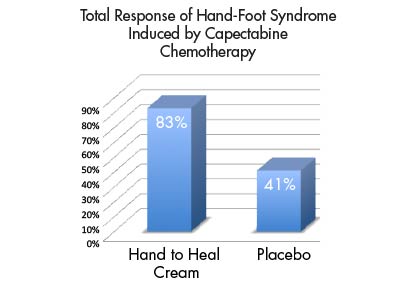 Purpose: Hand-Foot Syndrome (HFS) is a common side effect of several chemotherapies such as 5-FU and its derivatives. Literature shows 45-68% cancer patients receiving oral capecitabine treatment developed HFS; 34% of them had severe HFS to a point where doctors had to reduce their chemotherapy dose or temporarily stop chemotherapy. Chinese herbal medicine JDXZF (including herba dictamni cortex, etc.) is an empirical formula. The preliminary study has shown JDXZF is effective for relieving pain and helpful for the skin lesion on treating HFS. JDXZO is an advanced Chinese herbal extract cream based on JDXZF for easy use. No side effect such as allergy or infection related to JDXZO was found. This randomized, double blind, placebo-controlled study aims to evaluate the safety and efficacy of JDXZO for HFS.

Methods: Cancer patients with HFS grade >= 1 (NCI-CTCAE version 3.0) caused by capecitabine were eligible. Patients received oral capecitabine twice daily on days 1-14. Capecitabine chemotherapy was repeated every 21 days in the absence of disease progression or unacceptable toxicity. Patients with same HFS grade level were randomized to cream A or cream B arm and instructed to gently apply cream on affected areas twice daily for two weeks. Patients’ HFS grades were assessed before and after treatment. Evaluation criteria: CR as symptoms disappear completely, PR as grade decreases more than one level, PD as symptoms or grade increase, total response rate as CR + PR. Time relative to HFS grade level decrease was counted in days.

Conclusion: JDXZO was superior to placebo in improving HFS. Cream A and Cream B were provided by Unitech Medical®

Footnotes: This abstract was selected for oral presentation at the Eighth International Conference of the Society for Integrative Oncology in November 2011. The formulation of CamWell™

Hand to Heal™ cream is the same as Cream B above in this randomized, double blind, placebo-controlled clinical study.